Cheralyn King, Director of our Project Management Office is a10 year veteran of iSeatz.

When did you realize that you were interested in technology?

High school, if not before. I went to a summer engineering program at Tulane and the professor said “if you like math then engineering is for you.” And I love math so I decided to pursue a degree in Electrical Engineering.

There were very few women in my engineering program – less than 5. I believe I was one of the first African American women to graduate from UNO with engineering degree.

“Maybe we need to bring back the Bring Your Mom/Dad To School Day!”

Tell us about your early career

My first job was at NASA in the Mission Control Center.

I worked in the payload department so I was responsible for the software that managed all the payloads on board. I spent 10 years there and it was a great environment though surprise surprise there were very few other women.

Then moved to Lockheed Martin working with the Navy’s HR system, which sounds tedious but was actually interesting and complex. Did another 10 years there. 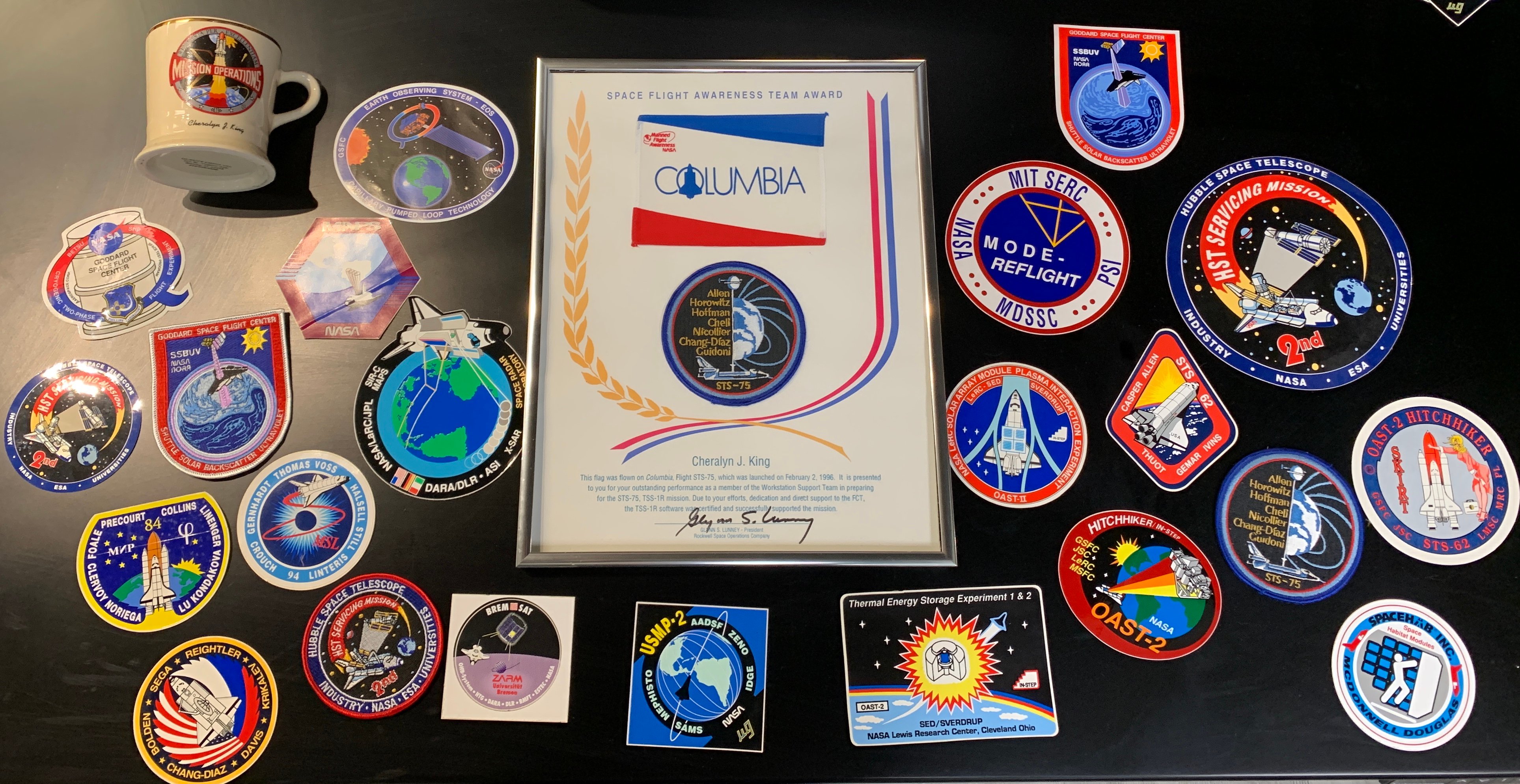 Image: Patches from the missions Cheralyn worked on during her time at NASA

Then I decided I wanted to move out of aerospace. I jumped into educational software at a math-focused education startup. That was something I thoroughly enjoyed. I loved going to schools and seeing children actually using the software we built. And through that I was facilitating these kids, including young girls, developing their love of math!

“If you like math then engineering is for you”

I started at iSeatz around 10 years ago. Previously I had always overseen the entire engineering department, so shifting to just PMO was a change. However, I think it is super valuable for anyone (especially a woman) in a technical role to understand the full lifecycle of software.

What do you love about your job?

I love the challenge of taking chaos and turning it into a plan.

Have you ever felt like you had to work harder because you’re a woman in a male-dominant field?

I think generally men see women as weaker and that they can easily take advantage of us. I’m someone who likes to be cooperative and “play in the sandbox,” but there have been many times that people have taken my niceness for weakness.

I once had a new employee who came in at an entry level. I was a director and he was an associate, but the very first request I gave him he blew up and said he knew better. Started yelling. I don’t think he expected me to fight back but I did. Yelled right back. Let me tell you, I never had a problem with that guy again.

How do you think companies can help mitigate those challenges?

The Women in Technology groups in our area are great, so getting employer involvement in those organizations is great. Also encouraging participation and giving women the time to participate is key.

Also a lot of women are deciding later in their career to go into tech, and so many of them are coming out of coding schools and not traditional Comp Sci programs (I know we have a lot of fantastic boot camp graduates here at iSeatz). So I think employers having good pipelines with those programs can help female engineers catch up, and correct the gender imbalance faster!

I think there is a lot of value in breaking it down. We talk about “women in tech,” but for a middle schooler what does that mean? Kids have no idea what a project manager, or chemist, or DevOps engineer does. Maybe we need to bring back the Bring Your Mom/Dad To School Day! And how empowering would it be to have a mother come to class and talk about building rockets or formulating a new line of makeup?

A lot of kids have an entrepreneurial spirit nowadays. They don’t want to work a traditional 9-to-5. So we can definitely emphasize better how much flexibility a career in tech will give you.

What advice would you have for women just starting their careers?

Find a mentor. Preferably someone from a different company. Don’t just vent but solicit honest feedback and advice. When I was coming up in my career there were very few women above me in tech, it was hard to find a mentor who had been there before me. Now we’ve blazed some trails and so there are some senior leaders. But it is equally important for women at my level and above to reach down and take the time to nurture our future leaders.

What did you think of Hidden Figures?

I loved it! It showed the impacts of women, particularly, women of color in a male dominated field.  Even now, there are women who quietly make major contributions that others take credit for.

Our favorite resources for women in tech: